In 1965, country music legend and superstar Roger Miller had a hit with “England Swings,” and the first line of the song was “England swings like a pendulum do.” That’s an appropriate euphemism for the changes we’ve seen in law enforcement in America over the last several decades. When I started policing in 2002, my fellow officers and I were already talking about the pendulum swing of citizens’ perceptions of cops and their use of force. It had gone from being conservative and supportive of law enforcement agencies, officers and proven tactics to being liberal and combative toward law enforcement agencies, their officers and tactics that had been tried and deemed effective over many decades.

Don’t get me wrong. There have been and continue to be legitimate cases of excessive use of force in America by its law enforcement officers. In these cases, the media’s efforts to bring them to light along with the outcry of the general public have been and often are on-point. Those cases are investigated by outside agencies, prosecuted criminally where appropriate and officers found guilty by a jury of their peers are fired and jailed.

That said, there is sadly something wrong when a veteran, NYPD Sergeant is decried by the public he serves, ostracized by his department’s administration and offered up for criminal prosecution for shooting a suspect who swung a baseball bat at him in an effort to split his head open like a melon. That Sergeant was trained, like all officers are, to respond to a deadly force assault with deadly force and that is just what he did. He fell back on his training and shot the suspect in defense of his life. Anyone who doesn’t believe the swinging of a baseball bat is a deadly force assault, hasn’t seen what a baseball bat will do to a human head, limb or internal organ.

It’s time for America to wake-up and turn to common sense and reason in assessing cases of use of force by police officers. These incidences should be investigated by not only the department in which they occur, but by outside law enforcement agencies, and independent citizens’ review boards that have received some education in these matters by law enforcement and criminal justice professionals. Each incident should be looked at in its totality and in context. Nothing happens in a vacuum and the Monday morning quarterbacks need to remain silent, unless they were there or privy to all of the circumstances surrounding the event.

Good cops, who apply the appropriate amount of force for the resistance encountered, in accordance with the law and their department’s policies and procedures, should be looked upon as the professionals they are and should not have to undergo a knee-jerk character assassination by their department administration, city leaders, the media, or the general public.

These issues and more are discussed at length in my new book, “So You Want to Be a Cop”, published by Rowman & Littlefield, and available in July 2017. To learn more or schedule the author for a book signing, speaking engagement, media interview, or public appearance, visit alleyevola.com.

"So You Want To Be a Cop" excerpted on PoliceOne.com

Booklist calls "So You Want To Be a Cop" by Alley Evola "required reading." 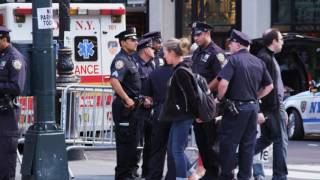 New So You Want To Be a Cop Book Trailer

So You Want To Be a Cop - Promo Code

So You Want to Be a Cop to be available Internationally and in the UK!

Author Now on Goodreads and Tumblr

"So You Want To Be a Cop" excerpted on PoliceOne.com

Booklist calls "So You Want To Be a Cop" by Alley Evola "required reading."

New So You Want To Be a Cop Book Trailer